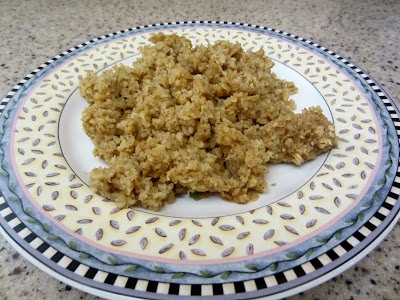 1)  Melt butter.
2)  In a small bowl, beat eggs well.  Add vanilla.
3)  In a large mixing bowl, combine brown sugar, baking powder, nutmeg or cinnamon, and salt with a whisk.
4)  Add egg mixture and mix well, no lumps.
5)  Whisk in butter and milk.
6)  Add oats and stir well.
7)  Pour mixture into an 8 x 8-inch pyrex glass baking dish that has been sprayed with cooking oil.
8)  Cover with plastic wrap and refrigerate overnight.
9)  The next morning, remove dish from refrigerator.
10)  Preheat oven to 350 degrees; 325 degrees if using glass baking dish.
11)  Bake, uncovered for 35 - 45 min, or until set in the middle.  (I checked after 35 min and it was ready)
12)  Serve hot with warm milk poured over.


My dil Sara at Our Heartspun Homeschool introduced me to Amish Oatmeal.  She said that the kids really liked it and then told me how she warmed it up the second day.  This caught my attention because I knew when I make it, I will be making it just for myself.  My husband has his Kashi Go Lean w/Grapenuts that he eats just about every morning.  I usually eat oatmeal but must admit I do get bored with it.  The Amish Oatmeal allows me to eat my oatmeal every morning, but it is no longer boring.  Why?  Because I have a special way I warm it up each morning. More about this later.

Sara found the recipe on food.com by Aurora who said she had found the recipe from an old Amish cookbook that she had. (I reduced the amount of brown sugar and increased the cinnamon or nutmeg.)

Amish Oatmeal isn't like what you normally think of as eating oatmeal. I think it is better.  Aurora describes it as tasting like an oatmeal cookie.  She might have added it looks like an oatmeal cookie.  Unlike most people, I don't add milk to oatmeal that I usually make in the microwave with quick oats.  BUT with this, you have to add some milk or it is toooooo dry.

When Sara makes the recipe, she sometimes add raisins to the recipe.  The recipe doesn't suggest this and so when I made it earlier this week, I forgot to do so.  I'm so glad I did, because that is how I came up with my special way to warm it up each morning and thus have some variety.

To warm Amish Oatmeal to eat another day, you put your serving size in a bowl, break it up with your spoon, and microwave on high for 1 minute.  Then add as much milk as you want and stir the oatmeal to absorb some of the milk.  Return to the microwave and heat it on high for 30 more seconds.  Remove, stir, and enjoy. 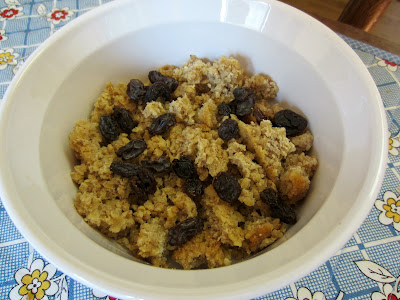 With raisins before I warmed it up. What I decided to do the second morning since I had made it plain, was to add some raisins to the top after I broke the oatmeal up with my spoon.  I followed Sara's directions for warming it up, and was pleasantly surprised.  The raisins were soft just like they would have been if I had  originally cooked the oatmeal with them. 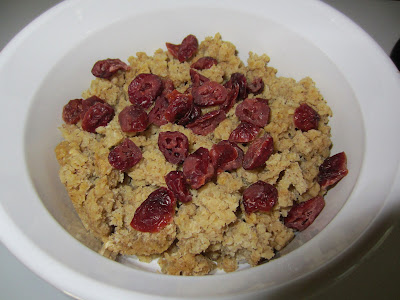 With dried cranberries before I warmed it.

The next morning, I decided to try dried cranberries. (This is the only time I took a before and after picture) 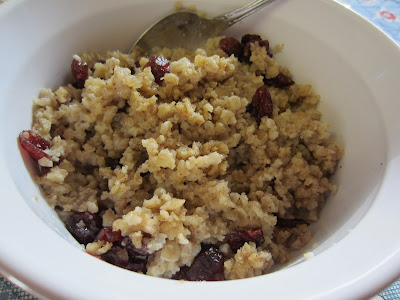 After warming it up with the dried cranberries. 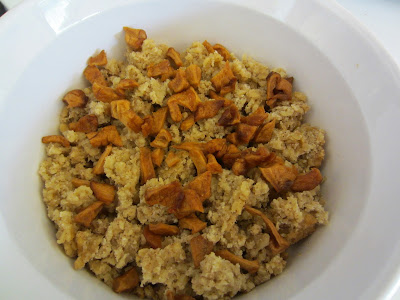 Dried apples before I warmed it up.


The third morning, I decided to use some dried mixed fruit that I had and cut up some of the dried apple. 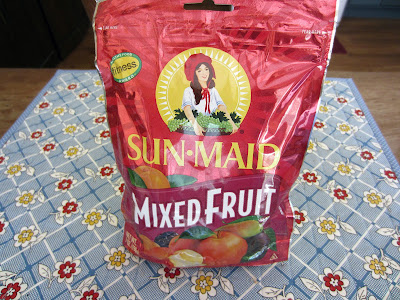 This dried mixed fruit has apricots, plums, pears, and apples.  I can have a little of it all or just pick out which fruit I want to add that morning. This would be great to use with children who may have different preferences for fruit.

This morning I cut up half of a dried apricot from the mixed fruit.


From now on I will make it plain everytime.