By 1857 the B&O railroad had a kitchen and dining car combo but the restaurant in the Relay House (in picture) still offered a breakfast of "Maryland luxuries" of "softcrabs" and "spring-chickens" which tasted like "luscious flavor of solidified cream browned over a hickory fire in clover scented butter."  The article also described the stone viaducts, Bollman's iron bridge, granite and iron works.

"After the engine followed a car, fitted up partly as kitchen and partly as dining-room. where fifteen or twenty could take their meals as comfortably as in the cabin of a packet; then came two cars with reading-rooms, writing-tables, books, instruments, and every thing requisite for the reconnoitering party, while portions were fitted up with state rooms for accommodation at night: and, last of all, followed a car with convenient seats and abundant room for observation. In the forward part of this train, in charge of the “Commissary Department," were several excellent waiters, of high repute in their useful sphere; so that I doubt whether a party started this summer in any quarter of our country,
The 24th of June was a fresh, bracing day, when we assembled at half-past six in the morning at the spacious depot, which is near completion, and were speedily off over the lowlands to the Relay House, where we breakfasted on the Maryland luxuries of “softcrabs" and “spring-chickens"—two delicacies which the unenlightened may get an idea of if they can imagine the luscious flavor of solidified cream browned over a hickory fire in clover-scented butter.
The Relay House is the first spot where one observes the broken country through which so much of this road lies, for it is situated on the rise of the hills, near the place known as Elk Ridge Landing, to which vessels of considerable tonnage came, in the early days of Maryland to load with tobacco for European markets. In consequence of diminished water, it has lost its ancient hustle and importance as a port of entry, and the Patapsco breaks through its picturesque gorge, with greatly shrunken volume, to find its way to the Chesapeake.

Here the railway branches to the West and to Washington; the latter track crossing the ravine on as tall viaduct of granite, and the former pursuing a beautiful and broken ledge of the stream toward its head-waters in the hills. The imposing, structure which spans the river with eight arches of sixty feet chord, at a height. of sixty feet above the Patapsco, was one of the early designs of that distinguished engineer Benjamin H. Latrobe, under whose direction the road has been completed across the Alleghenies to the Ohio. …
The road turns around a bluff on quitting the Relay House for the West.  It leaves the viaduct on the left, passes the Avalon Iron Works, and skirting the river for six miles, reaches the village of Ellicott’s Mills.  Throughout this transit there is charming variety of hill, rock, and river scenery, interspersed with continual evidences of agricultural and manufacturing industry, the whole overshadowed at this season by fresh foliage among the granite which abounds in this district. 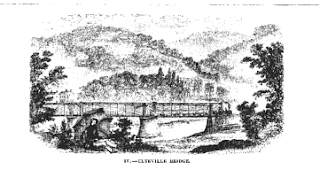 From the Relay House to Ellicott’s Mills, and thence onward to Elysville, the Patapsco gradually narrows and brawls over a rocky bed, affording valuable water-power which has been prosperously employed. We halted at Elysville for a short time to examine the peculiarities of an iron bridge invented by Mr. Wendel Bollman, of Baltimore, spanning the Patapsco with a double track of three hundred and forty feet. There are so many valuable elements of strength, security, and permanence in this invention…
We wound westwardly from Elysville five miles till we struck the fork of the Patapsco, when we turned its western branch, passed the Mariottsville quarries, crossed the river on an iron bridge of fifty feet, ran through a tunnel four hundred feet long, and hurrying across meadowlands, followed a crooked gorge to Sykesville in the heart of a region abounding in minerals.
“A June Jaunt” by Brantz Mayer. Harper’s New Monthly Magazine.  April, 1857
©2017 Patricia Bixler Reber
Forgotten history of Ellicott City & Howard County MD