Had an appointment this afternoon, so the three of us decided to make a day of it. We went out to lunch and ran a couple of errands.

One (oh so fun) stop was the grocery store. It wasn't super crowded, which was nice for a change! Headed for the register, and every line was sooo long though (ahhh...that's where everyone was) except this one. I should have know better.

We get in line. Hubby heads in first so he can unload the cart onto the conveyor. There is an older gentleman in front of us. He started showing hubby all his groceries and telling about all the "deals" he was getting. No big deal.

I forgot something, so I took off real quick. When I came back, we were being rung up (by the slowest cashier on the planet, but that is beside the point)

Fast forward, we are home, groceries unloaded, I am putzing around with this that and the other, and hubby just pops out with "I didn't care for that man in front of us in line".
I said that he seemed nice enough to me.
He looked at me with this ugh look on his face and proceeded to tell me that as soon as I took off, the guy leaned over to him and started telling him dirty jokes.

Now, hubby is a man's man, and he and the guys tell their fair share...but apparently this guy was making him blush.
I guess the guy finished and left quick enough that hubby decided it wasn't worth saying anything to him over.
Note to guys: Other guys think it's strange if you randomly start telling dirty jokes to strangers at the grocery store.
That is our lesson for the day.

Directions:1. Unroll crescent dough, separate into rectangles (made up of two triangles)2. Press seams closed3. Cut each rectangle into three equal squares4. Sprinkle approx 1 tsp of cheddar cheese on each section of dough5. Place an olive on top of the cheese6. Roll dough around olive and seal well7. Sprinkle toasted sesame seeds on top8. Bake at 350 for 10 minutes 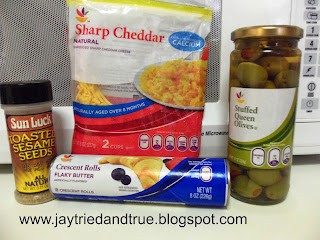 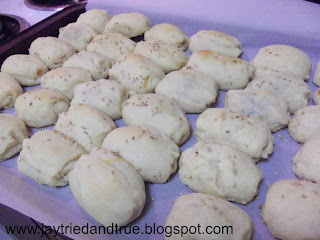 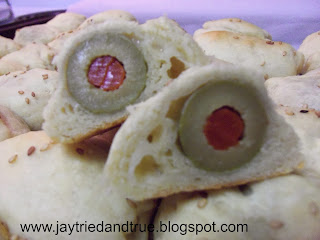 Come party with me HERE!