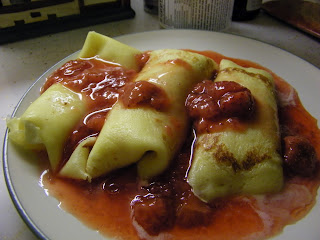 A bit of Disney history. On Oct. 1, 1971 the Gulf  Hospitality House opened at the Magic Kingdom. It was of course sponsored by the Gulf Oil Cooperation. It served to direct guests, make on grounds hotel reservations, and give driving directions among many things. It later changed into a gift shop and went through many modifications. The original restaurant was on the north end of the Hospitality House and was open air dining. It was called the Town Square Cafe and was sponsored by Oscar Mayer. From 1981 - 1989 it was sponsored by Hormel. In 1989 the entire place was renovated and then took on the name "Tony's Town Square" after Tony in Lady and the Tramp.

Thank you to "Widen your World" for this bit of background information.

While the dessert has to be made in three parts, it was not difficult. The crepes are perhaps the hardest part. If you use the 6-7 inch skillet as the recipe calls for it isn't hard at all (I learned that the hard way by using too large of a skillet on the first one). The inside filling is wonderful. I couldn't get the strawberry melba sauce to thicken the way I it was supposed to. Regardless, it had a good flavor. I would suggest letting ALL parts cool before serving. I didn't do this with the sauce and it melted the inner filling. While still good it would have been better unmelted :-)
4 mickeys. 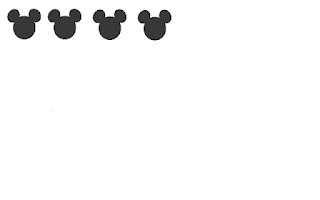