Before we left on our escape from the cold to spend two weeks in Hilton Head , SC, I was trying to get together some food to take since we were driving from my pantry instead of buying once we got there. Since we were going to be there for two weeks, I decided I would take the ingredients or most of them anyway, to make a dessert for us to enjoy while we were there. I thought I would make a cake of some sort and dug out my Cake Doctor cookbooks by Anne Byrn because I always have lots of luck when I use her recipes.This cake came from her Cake Mix Doctor Returns cookbook with 160 All-New Recipes.

We checked into our Resort Island Links on Sunday afternoon just in time to watch our Kansas City Chiefs beat the Titans for the AFC championship which means they will be playing in the Super Bowl next Sunday for the second time in 50 years. The weather has been a little crazy everywhere with very cold weather so our first couple of days in HHI were below normal by about 10 degrees. While it was cold, it was hard to complain knowing it was really cold back in KCMO, but nevertheless it was cold.

We drove around to get reacquainted with the island as we were here a few years ago with our friends Janice and Leon and found the Hilton Head Diner to eat lunch. The food was great and I had half a sandwich to take back to our place for Wayne to enjoy for dinner that night. We found a place to park near the beach and walked for a bit on the beach. It helped that the sun was out with not a cloud anywhere in sight, but walking back into the wind was a little bit uncomfortable. We drove around some more and then I told Wayne we could go back to our place and I would make my cake.

Before I could start I had to call maintenance to see if they had a mixer available as they don't have one in every condo, but that only delayed me a few minutes. The only ingredient I didn't have was the vanilla, but that is the only reason I omitted it. (I had packed my tube pan once I had decided what I was going to make since I didn't figure they would have one of those at the resort.)

The cake turned out so-o-o-o-o good. All I needed was a scoop of ice cream to have taken it over the top, but trust me, it was awesome without it.  All of the chocolate chips gave it a pudding taste in a rich chocolate cake. I used a sugar-free devil's food cake mix and a sugar-free instant chocolate pudding. The yogurt I used was non-fat that was also plain.

It was so funny when Wayne walked in the kitchen and saw the cake, he asked me who I was going to give it to. I laughed and told him it was for us that I had reduced the sugar as much as I could so that helped. I will definitely have to go to the fitness room every day if I eat a piece every day. 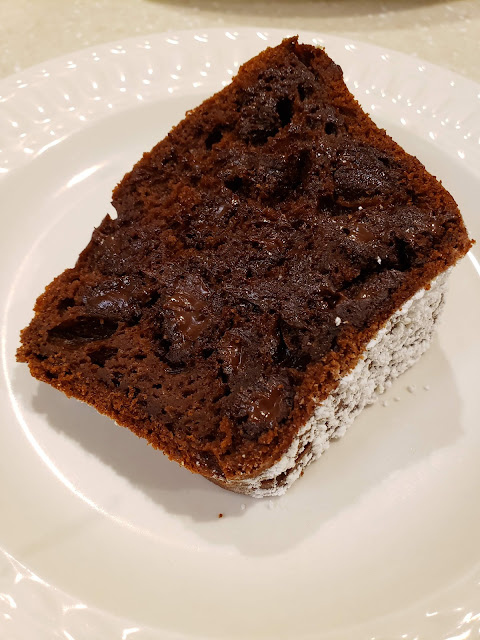 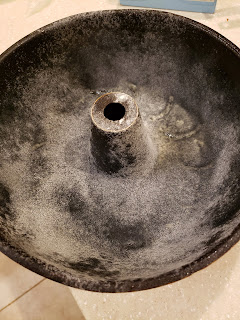 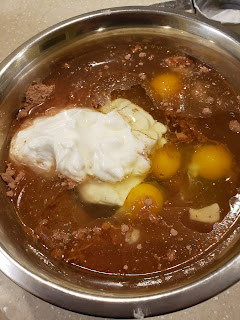 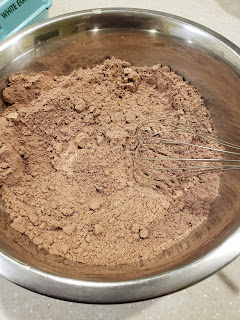 (I mixed up the cake and pudding mix first before adding the other ingredients.) 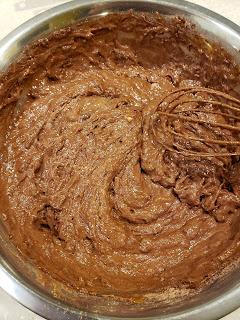 Mix the ingredients on low initially to incorporate the ingredients (I used a whisk to do this as the mixing bowl was just big enough and I didn't want to make a mess) and then after scraping the sides of the bowl with a spatula (I brought mine just in case they didn't have one, but they did.), 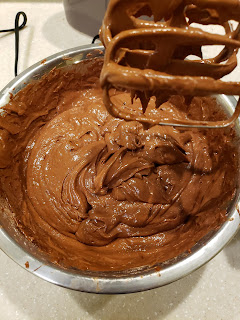 beat the mixture for 1-1/2 minutes until smooth and thick. 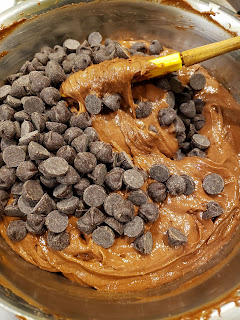 Fold in the chocolate chips and 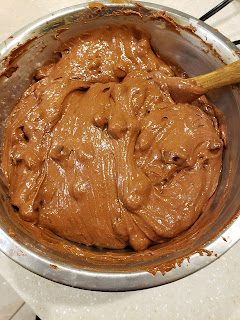 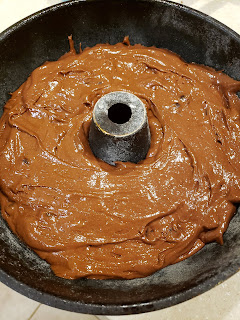 then pour batter into cake pan smoothing out the top. Bake for 55 to 60 minutes until top springs back when lightly touched with fingers. 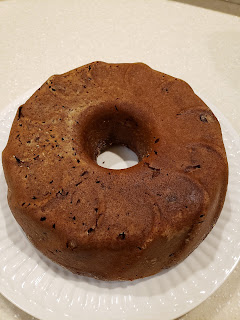 Cool in pan on wire rack for 15 to 20 minutes before removing. (I used a rack from the oven that I removed before I preheated the oven to have a rack to cool the cake.) Remove cake by inverting pan over large platter/plate (Surprise! Surprise! When I found a large platter in the cabinet. They must have known I was coming. lol) 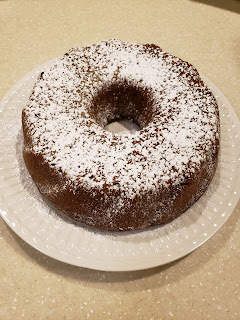 When cool, dust with powdered sugar. Cut and get ready to be totally delighted!

Since I didn't have a cake cover, I had to figure out what I was going to cover the cake with after we cut it. 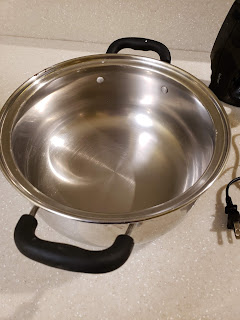 First I tried to use this pot but the handles on the sides are a little higher than the top of the pot so they kept the pot off the plate. 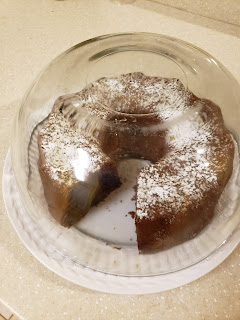 Then I found this big glass salad bowl and it worked just perfect! 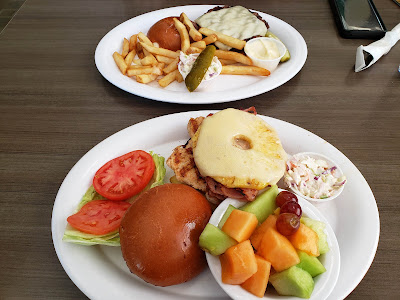 Here is a picture of our lunch that we enjoyed at the Hilton Head Diner.