"Line will be in operation in time for Christmas Shopping" was the headline for an 1898 article in the Baltimore Sun.  Initially started in 1895 by the Edmondson Avenue, Catonsville Ellicott City Electric Railway, they stopped constructing the road which involved cutting through a 50-foot hill and diverting a stream. The new company had problems building the eastern bridge abutment and had to get permission to shut down the mill race for the Gambrills mill while they built the abutment.

1895  "Cutting through a 50-foot hill was one of the feats of the Edmondson Avenue, Catonsville Ellicott City Electric Railway, of Ellicott City, Md.  The hill was 300 feet through and was mostly granite, which made the work difficult.  Slow progress was made, although two gangs of men were at work, one on each side.

In the same locality it was found necessary to divert the course of a stream through a hill in order to get it out of the way of the road."
Electric Railway Review  Nov 15, 1895


1898  Trolley to Ellicott: Line will be in operation in time for Christmas Shopping…Since commencing the undertaking, about the first of this month, about 300 men have been employed.  It is expected that one track will be completed from the Catonsville terminus to Ellicott City next Saturday night, and the entire line, with two tracks, will be finished and put into use by the middle of December. …The Sun.  Baltimore  Oct 17, 1898

1899 Problems building eastern bridge abutment"The construction of the eastern abutment for the trolley bridge of the Patapsco at Ellicott City has been found to be a difficult job, calling for the best engineering skill.  According to the designs for the work the granite pier must be bedded on the rock.  To reach a solid foundation it is necessary to mine far below the turbulent waters of the river.

On the land side of the pier is a large mill race, walled up thirty feet high.  It was necessary to put a new foundation under this massive stonework and far down there the stonemasons undertook the task, which was accomplished successfully.  The Gambrill flour mills shut down to allow the work to proceed with the water out of the mill race.Many hundreds of spectators, numbers of whom came out from Baltimore, viewed the work as it progressed.  Steam pumps were employed to keep down the water when the masons were at work.  Albert Weber, the contractor, hurried the construction, for fear of a rain and a freshet down the river, which, should it catch the job incomplete, would cause heavy loss."The Sun Jan 24, 1899 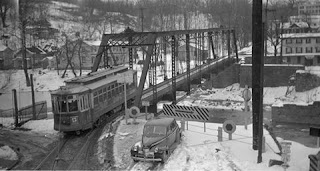 1899 Ellicott City Trolley Line  "The work of stringing the trolley wires for the United Railways, to bring the line over the Patapsco bridge into the Howard county portion of Ellicott City, began here today.  Cars are expected to be running to this side by Saturday night, the temporary terminus to be on Main street, opposite the Baltimore and Ohio Station.  The tracks extending further up the street to Fell’s avenue are not yet quite ready, but are expected to be by the Fourth of July.  The change to go into effect tomorrow night will make electric cars run in Howard county for the first time."The Sun July 1, 1899
“An Act to authorize the Baltimore and Washington Transit Company of Maryland, and the Edmondson Avenue, Catonsville and Ellicott City Electric Railway Company to consolidate under the name of “The Baltimore and Washington Electric Transit Company.”
1894 Md. Senate
"Baltimore, Md.—The Edmondson Avenue, Catonsville and Ellicott City Railway Company will erect a new power house on a plot 200x400."Real Estate Record and Builders’ Guide.  Jan 25, 1895

View from the end of the trolley trail looking to EC.  Support walls that would have been by the mill race and further west, the abutment along river.