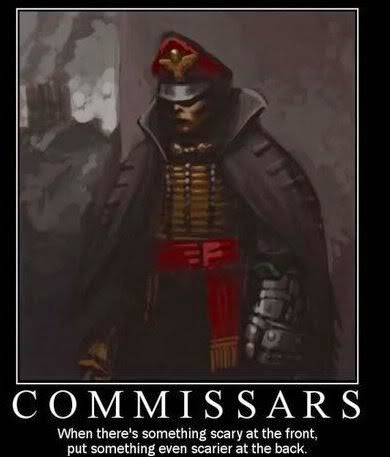 Commissar Yarrick, the hero of Armageddon.  He has already been talked about by many and rightfully so.  The new incarnation of him is a far step beyond his old self and he is a top competitor for your warlord.  Despite what many are saying he is not an auto take but is certainly a great choice if you do want to bring him.  There are a few changes that make him so.


First off, he now sits 45 pts cheaper than before, quite a bit cost cut and has even more going for him than before.  What you get from him is a standard Lord commissar profile with the exception of T4, an important boost though it may seem small.  He has a storm bolter, bolt pistol, CCW, Power klaw/fist, frag and krak, and carapace armor.  In addition to that he has a Power field that gives him a 4++ and the bale eye which has the stats of a hot shot laspistol and can be fired in addition to another ranged weapon.  He has AoD, Chain of Command, Summary execution, and IC.  Now here is where things get interesting.  He also has Eternal warrior, preferred enemy orks, voice of command and senior officer, and finally Iron will which lets him get back up with a single wound after he loses his last.  Basically if he dies, place him on his side, on the start of your next turn roll and on a 3+ he gets back up.  Note you can keep doing this till you finally roll a 1 or 2, it is not one use only.  Finally his warlord trait is draconian disciplinarian, meaning units within 12" do not test for morale for taking 25% casualties.

So what you have is a 3 Wd beatstick that can punch things to death and will be fighting for a very long time.  In addition the troops around him will almost never break (as long as he is warlord, key!) and he can issue two orders as a senior officer.  He is all the goodies of the Imperial Guard HQs all balled into one.  He is missing stubborn though, so until that is remedied with a FAQ, there is that.  But if he is your warlord, his trait means he will never be taking morale tests for combat losses where stubborn shows the most use.  As well he just execute someone and pass the test if something comes along causing the unit to have to take one.  So while its silly he does not have it, its effect is negligible.

Enough with rules conundrums.  How to use him.  Well first off he makes a great warlord and leader of your army.  If you are looking it get orders and leadership bonuses and get on with spending points on the rest of your army, he is the one to look to.  He is very hard to target and kill as an IC and with his stats will be making slay the warlord a tough option for your opponent.  He is going to work best in the center of your line spreading his discipline around and anchoring your line.

As an independent character do not be afraid to move him around though, move him to where he is needed most and if an assault is coming, do not be afraid to put him into the grinder.  At worst he will hold an enemy unit up for a few turns as they try and munch through some essentially fearless guardsmen and a powerfist wielding crazyman.  As always the priests are a great include and will make yarrick even harder to kill and ensure he is wounding.

I know a lot are saying to stick him on a quad gun and use his BS and orders to max effect.  And this is a great place to start.  But always make use of his IC status.  He is the whole package and never forget that, he can fight as well as buff.  Same with priests, do not be static with them, mass them when needed to tip a fight in your favor and move them to where they are need most next.  Yarrick is like them in that he is a force multiplier, wherever he goes things work better.

He is going to best work within a nice blob squad that has a good mix of ranged weapons and power weapons.  This unit is going to be your line holder, making use of his orders to max effect.  You should keep a second similar unit close by for him to join if his takes too many casualties.  I would avoid conscripts with him, they are just not good enough to put him in.  Not saying he won't make them better, but a blob squad will make far better use of having him in them, a standard commissar will ensure conscripts will never break and free yarrick to do what he does best.

You should try and get him into combat when the opportunity arises, he will bully most line units into the ground.  An option is to go with a human wave IG army and run the blobs up the field with him with lots of assault weapons, get in close and use your priests and Yarrick to overrun your enemies line and keep the advance going.  You can take more than enough guardsmen when it comes to points, only number of models you have will hold you back.  Using the fire and advance order you can keep up fire and move quite a bit early in the game, closing with the enemy fast and still keeping up fire.  Have some artillery and russes in the back field to support along with a scouring unit or two to hold objectives if needed.  The tactic here though is to get across the field with minimal casualties and overwhelm your opponent with targets.  Use conscripts up front to soak the fire with your blobs behind to finish the job.  With yarrick, priests, and commissars you'll have an army that is as fearless as it can get.

He can work well with a CCS, though in my opinion they should not be joined unless needed for CC punch.  Keep them apart to spread their benefits around, the CCS should have a standard to ensure that you have leadership buffs where Yarrick is not around, this gives yarrick freedom to move where needed and not have to worry about keeping him stuck in place.  The CCS is good as well as it adds more orders and the advisors, importantly officer of the fleet to your army.  They are a good tag team and will keep your army functioning and give another leadership target for your opponent to target instead of just yarrick on his own.

While he is at his best as a warlord, he works great in another area and that is as an allied HQ choice.  Though you lose his trait that really makes him great, he will still be keeping units in line with AoD and summary execution.  With a few priests and commissars in your allied detachment, leadership issues won't be too much of an issue.  Here though you want to make more use of his combat capabilities and build a force that can get in close and strike hard with yarrick in the fray.  Even with only two platoons you can field a cheap and determined detachment that your opponent is going to have to deal with, and yarrick will ensure that your opponent will not have an easy time laying them low.  This will give your primary detachment freedom of maneuver to strike where needed while your opponent is focused on cheap masses of nigh fearless infantry.

The key to recognise here is that Yarrick works best with infantry, and a good amount of them.  He doesn't need them that is sure and you can certainly take him and token units, but if you want russes, you should be taking a tank commander anyways and cheap priests for leadership boosts.  Use yarrick in the center of your line and don't forget that he can move about.  Priests are good support units when he is in CC but only keep them together for that, when the combat is won, spread them back amongst nearby units.

Despite some rules issues, Yarrick is a great choice for HQ and should be strongly considered if you want a solid HQ with the whole package.  If you want him though, he is your warlord and you need some infantry to get the best use out of him.