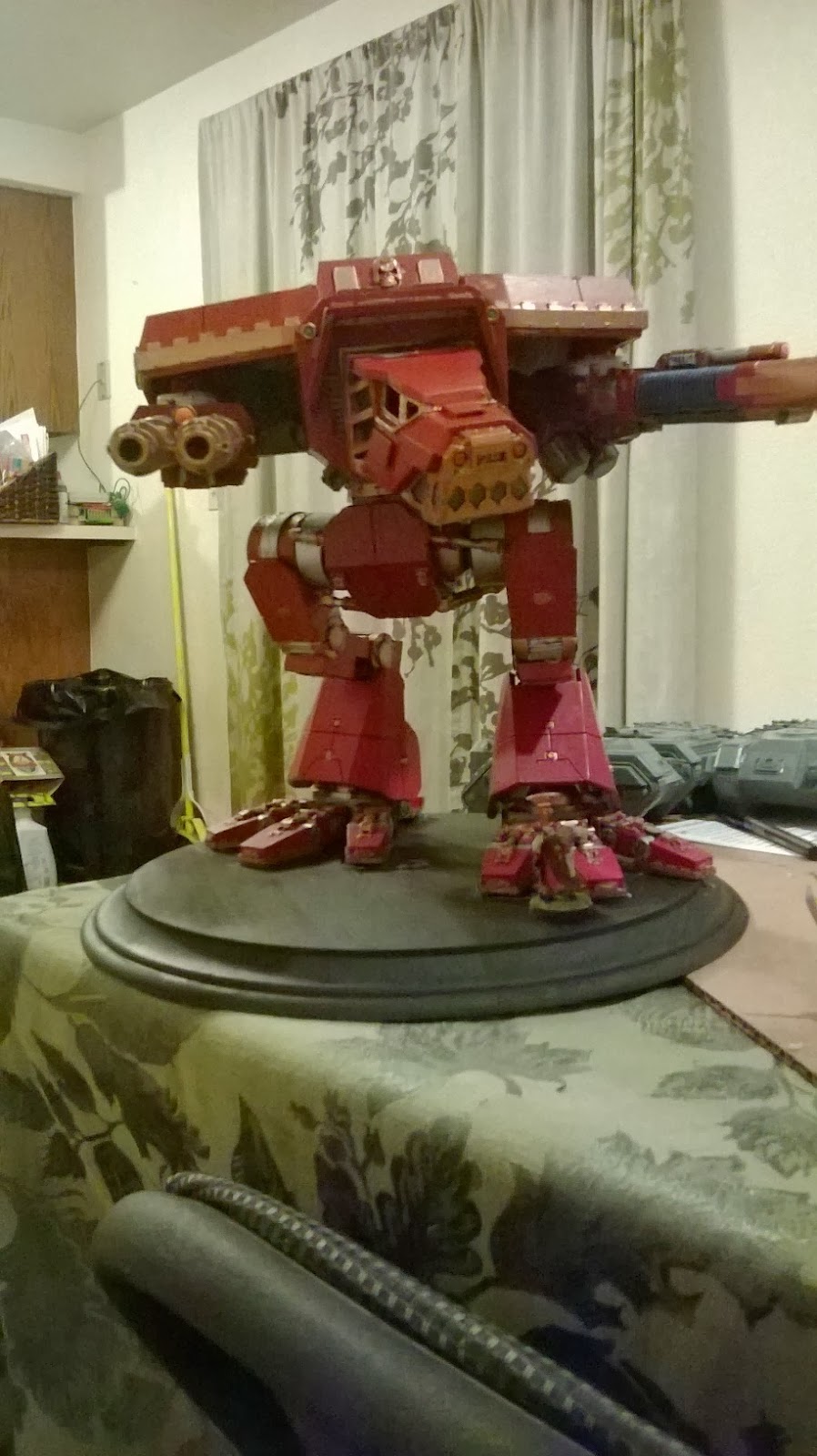 Alright so now I want to talk about actually building this beautiful monster.  If interested check out the Batrep of the Warhound vs the Ultramarines here, it was brutal.  Also IG players don't forget to vote in the poll and comment here.  On to the Titan.  I will say this was a learning experience and though FW produces amazing models, their instructions are not that amazing.  But I was able to stumble my way through it.  Main issue is that the legs were not positioned back enough, so the titan when fully assembled would not stand up as it was to forward heavy, thus the large base you see there.  So if you are building a Titan, take that to heart and make sure the legs are back enough to support the weight, its a heavy model, especially up top.﻿ 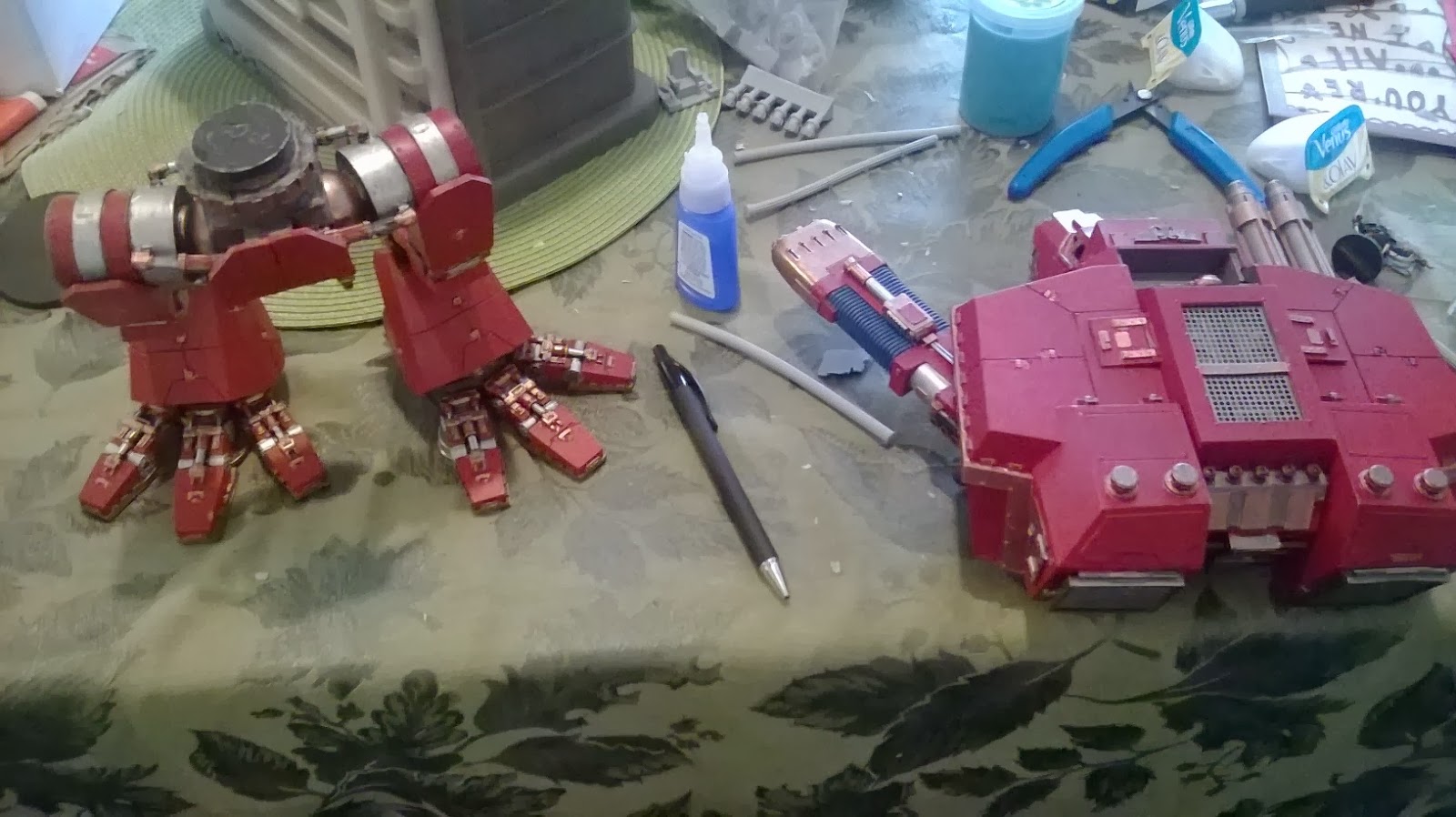 That being said it was still fun to build and awesome to behold once all the work went into it.  It took about three days to finally get all the parts cleaned, trimmed, and glued together, then the rest of the week to get it all painted.  My brother has done pretty much all the painting you see here, besides some minor work by me on touch up and adding more bronze color.  Thanks again to my bro for an awesome gift, and for getting the base paints done :).  There is lots of little detail, especially in the feet and with the pistons.  Those were a pain because you have to cut all of the pistons to the length you want.  Which is great for posing, but not so great on getting things done quickly.

You can see it pretty much in the final stages here, split it between the upper and lower body.  If you want to, I highly recommend magnets, this will ease transport and swapping out weapons.  If you want to.  If you are looking for a sweet display piece to play with every once in a while, don't bother. 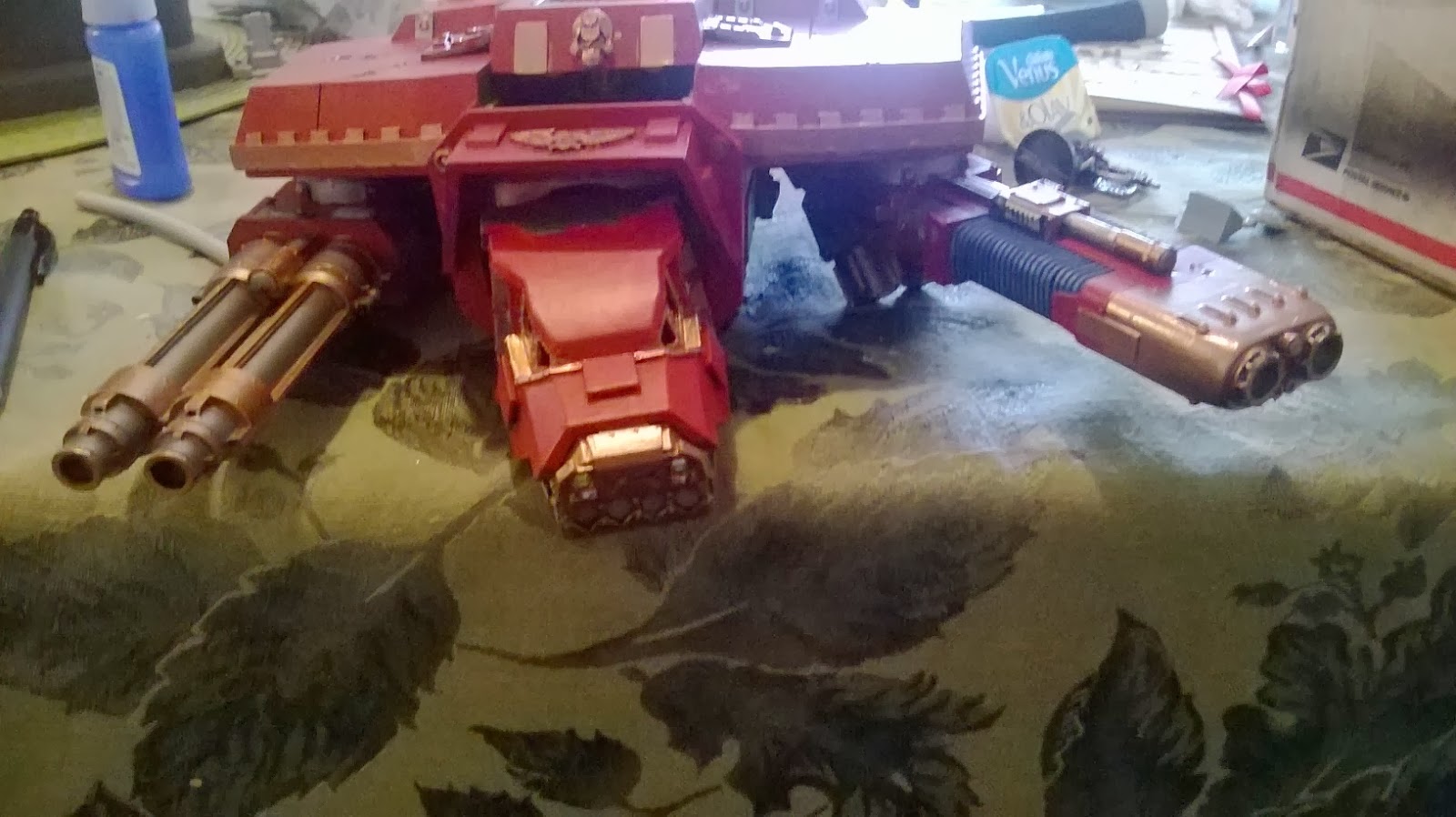 All that is really missing here it the final top hatch piece, that was still in painting at the time of the picture.  Not much to remark on here except how sweet it looks from the front.  Was trying to go for the titan looking like it was aiming to the side to deal with some target coming on its flank.  Think I was able to get it to look mostly like that.  ﻿ 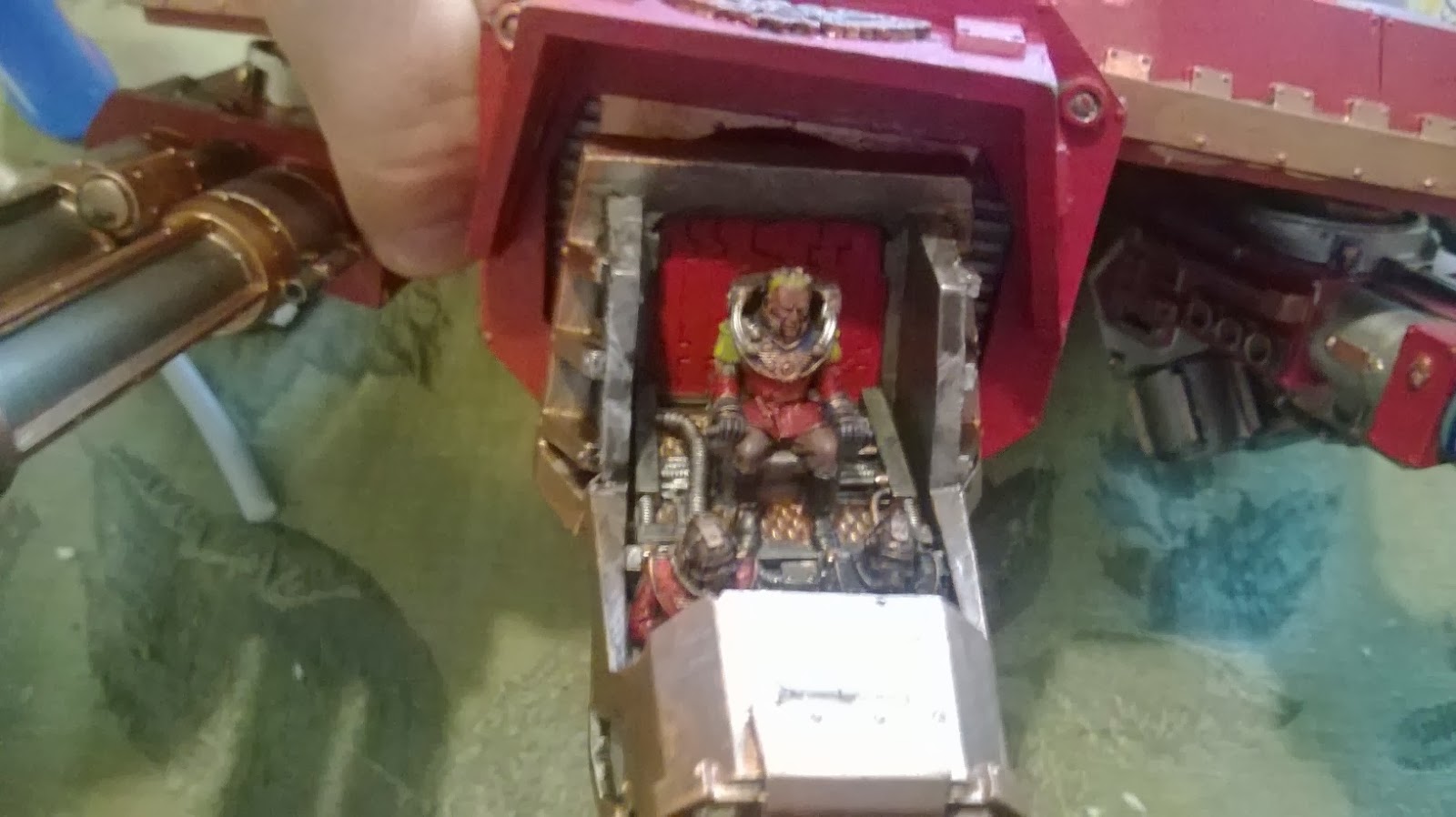 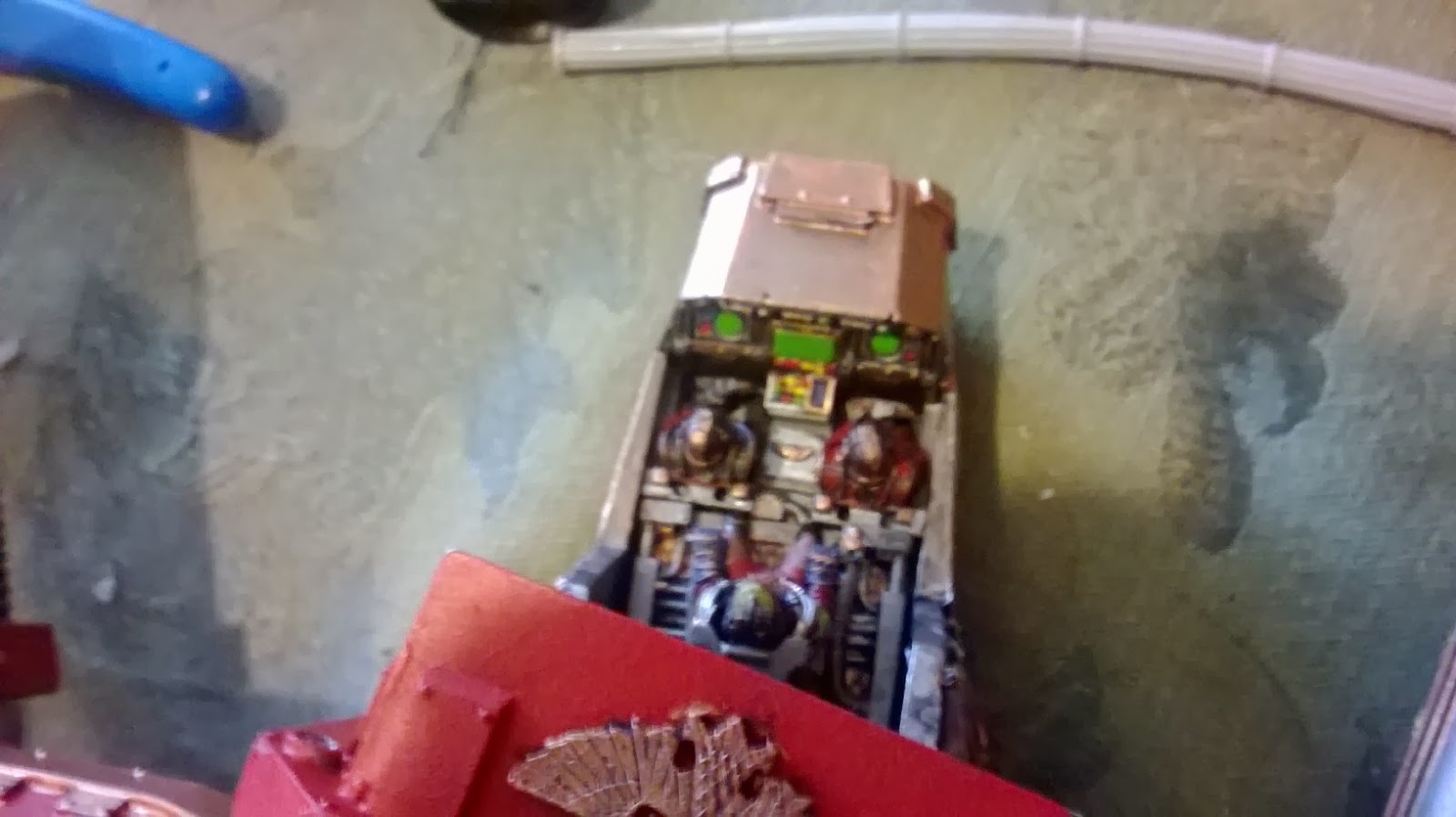 Cockpit has nice mix of drab colors with metallic's as well  as the bright colors form the screens.  In the future I will be touching it up to add more contrast as well as go for a nice glow effect from the screens on the interior.  Going to try my hand at some object source lighting and see how it goes. 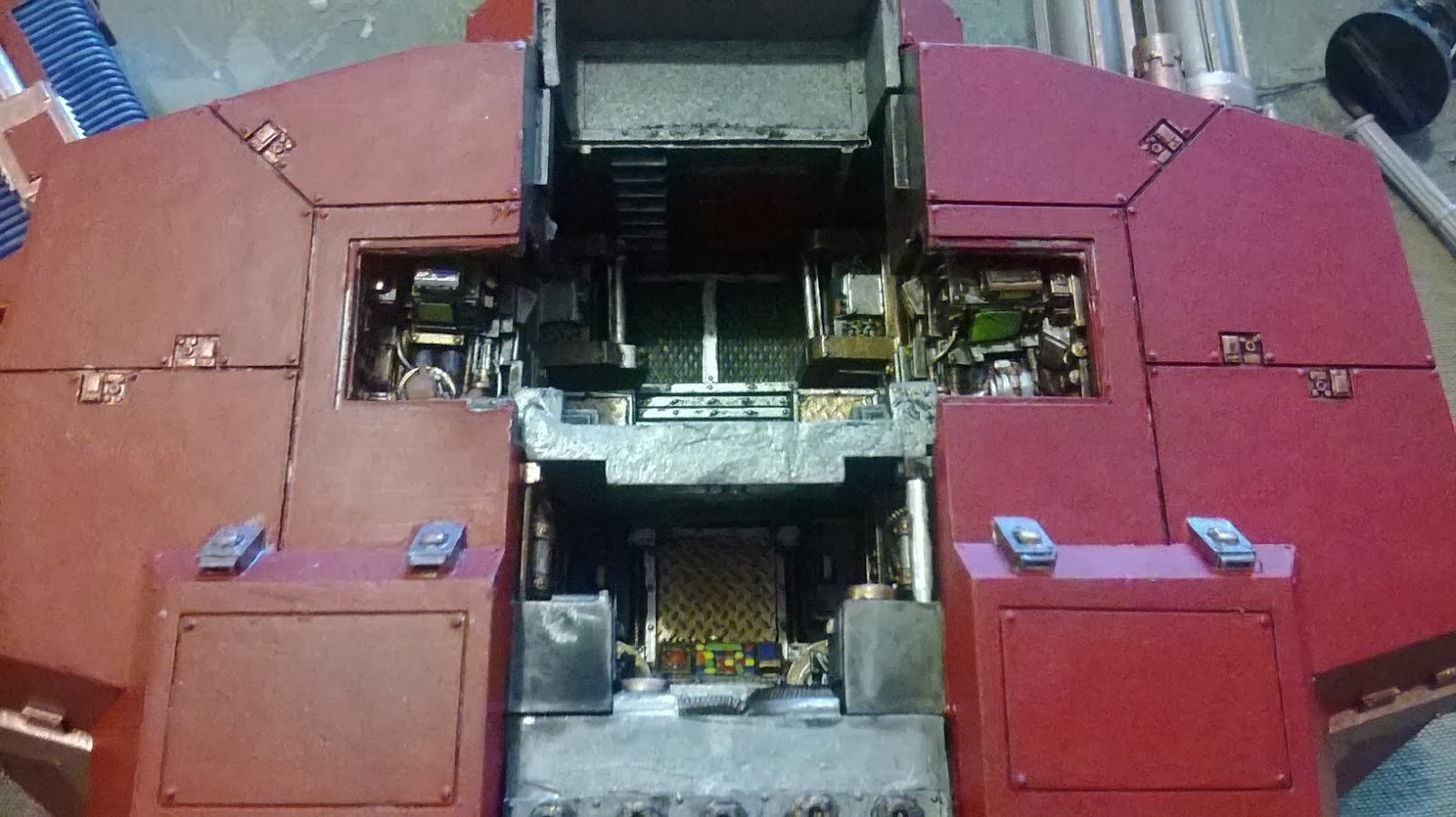 The main interior has a similar scheme, I like the drab metallic and the not too frilly look.  Really gives the Mechanicus feel for me.  My favorite is the skittles keyboard in the back :).  Definitely a lot more work to follow with a few more coats and a lot more detail work.  Get some weathering and at some point come up with the plan for the base as well.  Thoughts have varied but have some extra Tau lying around that may find themselves being crushed by the God Machine.

Its name is Vindex Draconis.  Its nickname is still Te Ipsum though, that may become my Legio's war cry :).

Hope you enjoy, and I will be sure to post updates as the painting comes along.  It may be awhile though.  And hopefully will get a knight vs titan death match at some point too :).