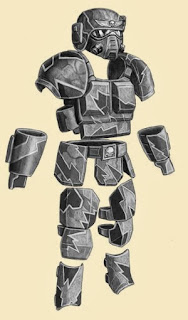 Now the imperial guard is not known for the quality of the armor it provides to guardsmen.  The standard issue cardboard seen as good enough, but for some there is the ability to take carapace armor.  I personally love carapace armor, and like the idea of my elite shock troops going into the fight and standing a small chance of surviving.  Its small but they at least have a chance.  Now I have visited some forums and for whatever reason, the general consensus among IG players is that carapace armor is worthless.  I completely disagree.  Is it over costed? Yes.  However the current meta makes it very useful and worth its points completely and here is why.  Ignores Cover.  With the rise of armies that can just ignore cover, the 4+ save means that many of those weapons that would just kill a regular guardsmen outright, now you have a chance of surviving.  Now yes there are helldrakes and other weapons that beat the 4+, but they autokill most things anyways so nothing you can do about that.  The big thing were this comes in is against small arms fire.  Boltguns, pulse rifles, flamers, shootas, etc.  The vast majority of small arms in the game have AP5, so now instead of just dying, you get an armor save.  This also comes even more into play against the armies that have abilities to ignore cover.

So the big boys in the room are eldar and tau, and both can ignore cover in their own ways.  Eldar is more limited but they can do it with psychic powers, tau have markerlights and SMS.  Against Tau this makes a big difference, as the SMS is AP5 and so is their small arms.  Granted they fire the riptide big blast and ignore cover you die, but so does everyone else and then they are wasting that on guardsmen.  But for a lot of things, you get a chance to live.  This really jumps your guardsman's survivability in a big way.  You do have to take veterans to get access to carapace and it is a 30 point upgrade, but they really aren't expensive to begin with and I can fit 50 vets in my army with plenty left over for other choices.  You can still bring the numbers that the guard need but now you have troops that can hang with Dire avengers and fire warriors and the other carapace armored equivalents.

Now don't for a second think because you threw carapace armor on you are now a space marine.  You aren't and if you are trying then you are playing the wrong army.  They are guardsmen and even vets with carapace armor are no more than expendable pieces to use to reach victory.  There is a reason I have 50 of them.  3 squads hold my rear and dig in to cover and my aegis, the other 2 are in vedettas to grab objectives and to make a play and counter attack my enemy.  Don't get fooled by their points into thinking they are a durable unit on their own, cause they are not.  Now they may not be "points efficient" but they work great.  My last game against CSM, he was a turn away from making a charge on my defense line, I dropped my 2 vet squads up front, they shot a bunch but only really ended up killing 4 marines, those 20 guys, they killed only 4 marines with their shooting, then they were charged, took another 2 with them and then died.  So the prevailing theory would be that I should not take them, as they did not "earn their points".  This is where that theory falls apart, because they won me the game, not because they killed a bunch of marines, but because he had to focus ALL of his marines into them in order to wipe them out, and carapace armor meant he couldn't just send one unit in to wipe them, he had to concentrate his attack to remove them.

They died, but after they died, all of his marines were left in the open, in front of my line.  Suffice it to say Lucius wasn't so eternal against a lascannon and the rest of the marines danced to death at the flashlight party.  Did they earn their points?  Not directly, but by using them as a speed bump, that he had to deal with because of their carapace armor, they certainly played their part in victory.  Using carapace armor brings a two fold advantage to your guardsmen.  You have increased survivability in cover, esp against ignores cover weapons, and you can be in the open and not just die.  This is huge, it really is.

Having the ability to survive in the open makes a huge difference in how you can use guardsmen.  Lets be honest, a space marine squad bolters a regular guard squad, at rapid fire range there is a good chance they are all dying.  With carapace,  you have a chance of actually surviving.  And in the current game meta, holding on as long as possible gives you a huge advantage.  I personally love playing the attrition game, and if you are a guard player and you don't, well you may want to find another army.

Carapace armor allows you to dig into cover and just hold on, and then when its time to take those objectives you have enough survivability to make it there.  To be fair, to play this way well, you need a lot of guardsmen and are bringing a lot of vets.  Is that a bad thing?  I don't think so.  Bring lots and then hold on.  Ideally it would cost less for the upgrade and hopefully they will get rid of the doctrines and just have them all as wargear upgrades.  But till then, you have to choose and for me I will be bringing the reinforced cardboard.