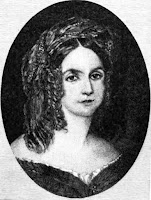 150 years ago, Jane (Gilmor) Howard led more than 350 Maryland women to collect the equivalent of $2.3 million dollars for the starving women and children in the South following the Civil War.  Additionally, she wrote a charity cookbook when she was 72 aptly titled Fifty Years in a Maryland Kitchen.  For several years in the 1840s, she and her husband Benjamin Chew Howard spent summers outside Ellicott's Mills at "Wyoming," near his brother Gov. George Howard's home "Waverly" at Marriottsville. One of their daughters attended the Patapsco Female Institute.

At age 65, Howard was president of the Ladies' Southern Relief Association of Maryland which held a fundraising fair in Baltimore from April 2-13, 1866.  Strong-willed and organized, she led the hundreds of ladies and an advisory board of men, most with southern leanings, to raise and disperse the over $164,000 (that's $2.3 million in 2016) collected at the fair to feed, clothe and send money help the destitute women, children and veterans in the famine-stricken south.  The southerners had to cope with the death or maiming of many of their men, the ravages of war on their land, destruction of homes and property; what crops could be planted were ruined by droughts or floods. After the ladies' success, other famine relief groups were formed including those in New York and St. Louis.

Howard’s popular charity cookbook Fifty Years in a Maryland Kitchen went through three revised editions during her lifetime, and two more in the first half of the 20thcentury.  It contained a culinary cross section – from an unusually large number of okra recipes and other slave fare, to recipes for farmers and fine dishes for entertaining.  Although Federal through Victorian era and foreign dishes abound, she collected truly Maryland cuisine such as terrapin, crabs, corned (pickled) ham, sweet white potato pie, and beaten biscuits.
Jane Howard’s lasting impact, in this sesquicentennial of her phenomenally successful fundraising fair of 1866, is by her coordinating the large number of volunteers, many individuals were saved from starvation; and by writing her cookbook for “benevolent undertakings” she preserved recipes used in 19th century Maryland.
Other posts on Howard: more on the fair HERE; her life HERE, and recipes HERE.