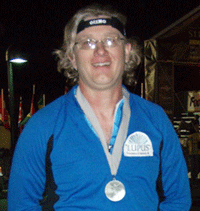 This came across my desk recently and I wanted to share it with you.

A few years ago, Jerry Norton retired from the Air Force after 22 years. To stay active, he took up running. He really enjoyed it, and then decided to take on his first marathon, which he did for charity.

Then Jerry decided to challenge himself further … in 2007 he volunteered at the Las Vegas Silverman triathlon, which is a 1.2 mile open water swim, 56 mile bike ride and a 1/2 marathon. A total of 70.3 miles. After volunteering, he decided that he could do that and immediately signed up for the 2008 event, even though he’d never done a triathlon in his life. Jerry didn't even have a bike, and he hadn't swam in 25 years.

Jerry knew an undertaking that big needed an equally big motivator to keep him from coming up with excuses to quit. His wife had recently been diagnosed with lupus after about a year of misdiagnosis from numerous doctors. That's when he made the decision to do the triathlon for lupus.

“I know what she's been going through. There was no way I was not going to finish the event, knowing I was doing it for a good cause,” said Jerry. “It seems most people are totally unaware of lupus. I found myself … answering questions and raising awareness about lupus.” He continued “I even had a flier for a Walk for Lupus Now event put on by the Lupus Foundation of America. I made some calls, sent some emails and set up a fund-raising goal of $3,000.”

After hundreds of miles of training (swimming, biking & running), the day of the event finally arrived. Thunderstorms delayed the start of the swim for 1 hour. The bike ride was windy, rainy and hilly. Then the final leg -- the run -- was another brutal element.

It was the toughest thing Jerry had ever done but “it was worth every ounce of sweat to see my wife and my friends at the finish line, supporting me and the Lupus Foundation of America.”

He added “several friends were there, representing families who had lupus. They couldn't thank me enough for helping the cause. My goal of $3000 was accomplished, even with our country’s tough economic times. I still wish I could have done more. There's always next year!”