My NES Console Dilemma: Box It, Or Donate It?


You may remember from Dumpster Diving Week 2009 that I acquired an original NES with tons of extra NES games and gadgets.

Well, it's been about three weeks now and I have only played it once. I know it's just taking up space, but it's hard for me to just donate it. All things Nintendo hold a dear place in my heart, especially the games I spent time with as a child. But perhaps the past is where it should stay.

You know what I mean; this happens to everyone. Everybody has something that they feel is a part of them, that if they gave it up, they would be giving up a piece of their soul. Something that would be better to keep and never use than ever let go of. That's why my NES is still safely packed up in my parent's house. (Right, Mom? Safe!)

The only way I would feel good about letting go of my original-original NES would be if someone from the Make a Wish Foundation (or the like) specifically asked ME for it. 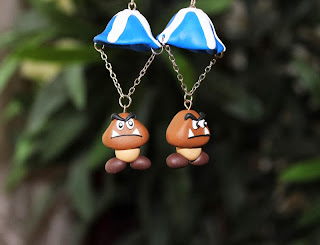 http://rebellya.deviantart.com/art/Goomba-Earrings-369828812Yes, I will hold on to that one for years to come. This counterfeit I have here in Provo is still hard for me to give up because it reminds me of the one I have back in WA.

So heads up, anytime you want to get me a gift, look for the original NES stuff. For example, shirts or, if I were a girl, I would love these dangling Goomba earrings [Goombas are the frowny mushroom guys that Mario Squishes and shoots fireballs at in Super Mario Bros.]