There's something about a flan that makes my mouth water- might be the caramelized topping- I'm a real sucker for that. I make a super one called Flan Cubano with, you guessed it, sweetened condensed milk. It's rich, velvet smooth and delicious. The recipe came from a Conch (pronounced konk) friend of mine. (A Conch, for the uninitiated, refers to anyone born and raised in the Florida Keys.) Conchs just love their sweetened condensed milk- let's face it, that's where real key lime pies were invented!

But for Thanksgiving, you gotta have pumpkin something or there will be an uprising so I turn to my pumpkin flan. I like it for two reasons: the gooey caramelized coating and the fact  there's no crust involved. Piecrusts are not exactly my forte... mine're acceptable, but not memorable. After a few mumblings from the more traditional members of my family, they have come to accept this flan as a perfect substitute for pumpkin pie. Same thing really, without the crust.

If you've never caramelized sugar for a flan or a crème caramel, I have only one thing to say: BE CAREFUL! It's hot. If it splatters on you- ouch! I speak from experience. No kids in the kitchen when you're doing this; it requires all your attention. Don't be afraid of it (if I can do it, anyone can), just be really careful and follow the directions.

This is one of those make-at-least-a-day-ahead desserts- which is something I consider seriously for any holiday but Thanksgiving is an unusually busy kitchen day. At least this dessert means one less thing to think about. And don't worry about flipping it at the last minute because inverting this on a plate will NOT be a disaster. I swear. Overnight the caramel in the pan kind of melts, coating the flan and it releases easily, no problem. (At least I've never had a problem.)

Personally, I like the flan plain but for those who like to gild the lily, I make a cinnamon flavored, sweetened whipped cream- easy enough to do. You might also give some thought to a crème anglaise- the flan would look divine sitting in a pool of that luscious sauce. I usually make this flan in a loaf pan (please ignore the shabbiness of my pan in the photo, it's been around the block, much like its owner) but you really can use any shape you want. I even made it once in a ring mold, much as I detest them. No matter what mold you prefer, use a cake tester to make certain it's done in the middle. I put a paper towel in the pan under the water bath-I think it makes for a silkier flan.

Serves 8-10 depending on how big your slices are. 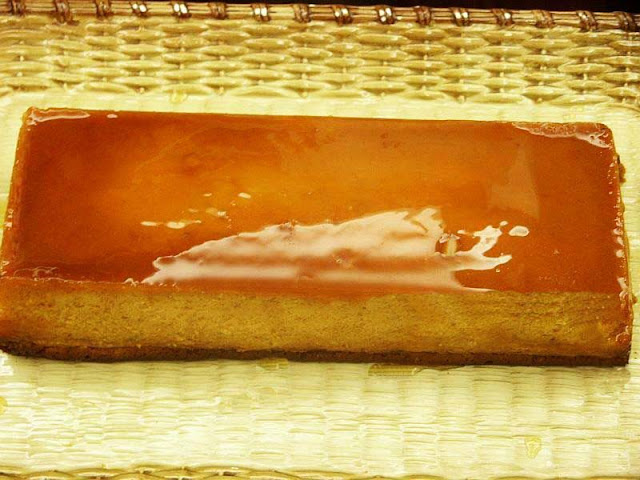 Method:
Combine 2/3 cup sugar with 1/4 cup water in a heavy saucepan and bring to a boil. Continue to boil, shaking the pan lightly and often (don't use a spoon) until it reaches a lovely shade of caramel. Have hot pads ready and pour the caramelized sugar into a loaf pan or ring mold, tilting quickly to cover bottom and sides.  It will harden immediately. And crack. Ignore this.

Beat eggs with remaining 2/3 cup sugar, beat in pumpkin and remaining ingredients. Pour into the prepared pan and bake in a water bath 350° for 1 hour and 15 minutes. Test center with a wooden tester to make certain it's done.

Let flan cool on the counter, cover and refrigerate overnight (or longer) before unmolding. When ready to unmold, take a sharp knife and carefully make certain the flan is not sticking to any sides of the pan.
Serve with cinnamon flavored whipped cream, if desired.