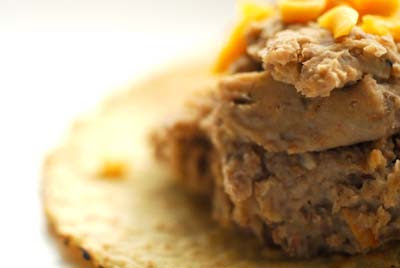 I was born with a silver spoon in my mouth, and it was filled with a heaping serving of refried beans. OK, the spoon may not have been exactly silver, but ever since I can remember, refried beans have been my favorite food. When my parents were young and still in college, we often ate at Pancho’s because kids got free rice and beans. And since I was too young to take umbrage at eating what was essentially poor-people food, I fell in love with the refried beans—the texture, the flavor, the way they filled my mouth and belly with a luscious, toothsome bite of beany goodness. I craved them all the time. Even today, while I enjoy the food that sits in between the rice and beans on your typical Tex-Mex plate, I still eat the beans first and regard everything else as secondary. I’ve even been known to order an extra plate of refried beans just to satisfy my desire.

Some of my favorite refried beans on the planet are served at Las Manitas in downtown Austin, TX. This café is known for its breakfasts, but I could care less about anything but the beans. I recommended the restaurant to my buddy Christine when she made a recent trip to Austin, emphasizing she must try the beans. And as she noted, they did not disappoint. I always suspected they make their dreamy beans by using bacon grease, and after a quick call to the restaurant my hunch was confirmed. The lovely woman I spoke with did not give me a recipe per se. But she did share with me her technique, which is very simple. Just fry up some bacon, remove the cooked meat, throw your beans in the pot and mash away. This is how I've long made mine, and I was pleased that I had been doing it correctly all along. And while many others may use lard for making their refried beans, which also makes them soft and smooth, I prefer to use bacon grease because it has that added smoky flavor.
Read more »