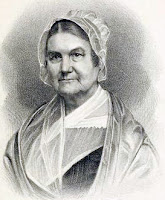 Martha (Ellicott) Tyson (1795-1873) wrote the book The Settlement of Ellicott's Mills, 1871 which included several education related topics.  Her father was George Ellicott, whose 18th century home is still across from the mill.  Various past posts about Tyson HERE

Sons of Chickasaw chiefs "The sons of two of the principal chiefs of the Chickasaw nation were also taught there, having been placed under the care of the Ellicotts, for educational purposes, by the Secretary of War for the United States, who delivered them at the school in person, in 1807.*
*These young chiefs when placed at school were about 18 years of age; they were proficients in the use of the bow and arrow, the blow-gun, and other Indian instruments, but their attainments in literature were not remarkable when they returned home."
Last river otter shot "There were also on the river many otters, but the high price given for their skins in market, led to a speedy reduction of their numbers. The last otters seen near Ellicotts' Mills were a pair that had lived unmolested on the island which divides the Patapsco near the Union Cotton Manufactory. They had grown grey with years, and on making their last excursion to the mainland, from their island, in 1806, they were watched on their return home and shot by an Indian, a young Chippaway chief, a pupil of the school we have before referred to."
Built school for all children immediately "Immediately on the completion of their family residences, and the erection of the stables for the draft horses, which were capable of accommodating eighty horses or more, Ellicott & Co. built a school house for the children of the village and the adjacent neighborhood. A school was regularly kept therein by the best teachers they could procure, and at a good salary, which was insured to them, whether the number of their pupils were large or small. Into this school, all of suitable age were admitted irrespective; of the means of their parents, any deficiency in this respect being supplied by the owners of the property [Ellicotts].  In this way many, who otherwise would have grown up in ignorance, received a fair amount of instruction in all the most useful branches of education."

Patapsco Female Institute  1829 Elliotts gave land and granite for the foundation"We have noticed their care in keeping up a school from their first occupation of their lands on the Patapsco. This concern, in regard to education, did not abate with years, but was strengthened by experience, and often manifested; their last act on behalf of schools, being a gift of seven acres of their woodland forest, as a site for the Patapsco Female Institute. The idea embraced in the regulations of the Institute, which empowers the principal of that establishment, annually to educate eight girls, for which they are to be paid out of the treasury of the State of Maryland, was a suggestion of George Ellicott. Some acres have since been added to the land by purchase, but the foundation on which the building stands, and the beautiful and commanding grounds immediately around the Institute, were all the gift of the Ellicotts, in 1829."
Tyson, Martha Ellicott. A Brief Account of the Settlement of Ellicott's Mills, 1871