It is amazing how temperatures that would normally feel cold to you can just be cool after having our extremely low temperatures for the 2nd and 3rd weeks of February. But we are finally having normal temperatures this last week and we have been loving it.

I had not been to Hillcrest Platte County Thrift Shop since the first Monday in February, but with temps promised in the low 40's, I was ready to get back. I was so surprised when I pulled up to the store and saw fewer cars than I usually do on Mondays. Not sure where everyone was, but the "guys" were waiting for me when I walked into the Community Room with this Scrumptious Pumpkin Cake. Of course they didn't know it contained pumpkin so they thought it was just a chocolate cake.

I was surprised to see that it contained a chocolate cake mix after reading the title. Volunteer Terry said he didn't taste the pumpkin at all. When I told them that I had used a sugar-free devil's food cake mix in it, Volunteer John said he might take a piece home to his wife Jan. After I admitted it did have 1/3 cup of sugar (not sure why they do that in recipes that use cake mixes), he said Jan was off sugar right now and if he took a piece home she would probably eat a bite and then tell him he could have the rest of it.

Terry got up first to take a piece and noticed a bigger than normal section was gone. I explained to him I cut it out because as I was taking the cake out of the oven, my hand slipped wearing a big mitt and it ran across the top of the cake taking the top soft layer with it. See picture below.

The cake was super moist and the top layer was very soft even the next morning. The recipe called for 2 cups of canned pumpkin and since a can of pumpkin isn't quite that much, I opened a second can to take a couple of spoonfuls out to have a full 2 cups. I won't do that the next time. I think the recipe will not miss that little bit less of pumpkin. The recipe also said to frost it with chocolate frosting or just sprinkle it with powdered sugar. I chose to do the latter. The cake is so rich it does not need the additional richness of chocolate frosting. The guys agreed with me. 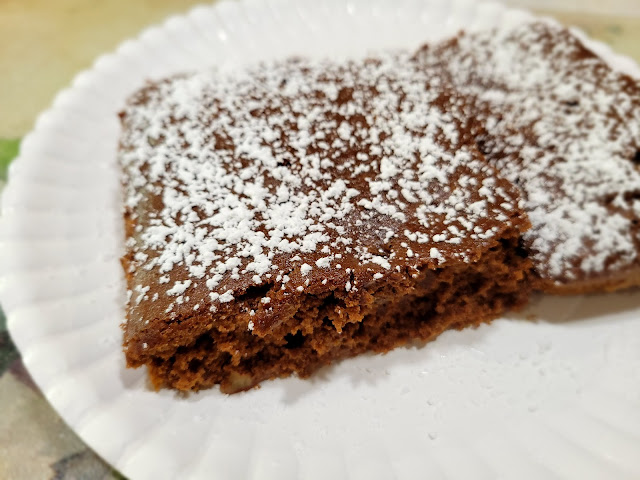 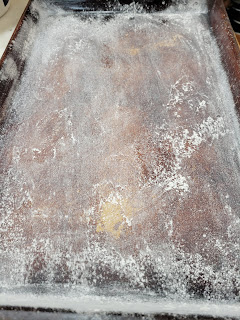 Preheat oven to 350 degrees F. Grease and flour a jellyroll pan. Set aside. 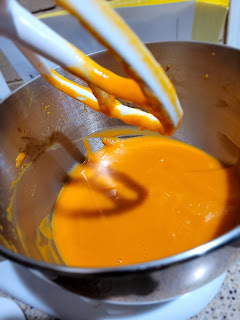 In a large mixer bowl, mix on high one minute: oil, eggs, pumpkin, sugar, and milk. 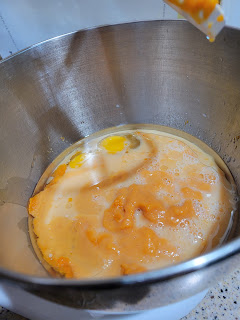 (Start on low until the ingredients are slightly blended.) 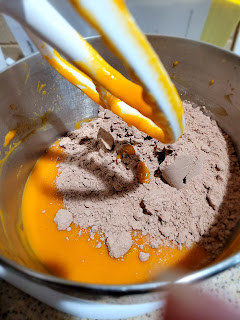 Add the cake mix and 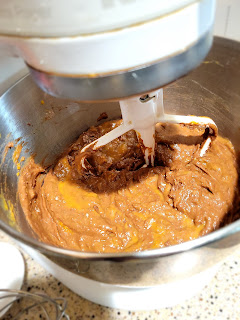 blend in cake mix on low, (scrape the bowl) and 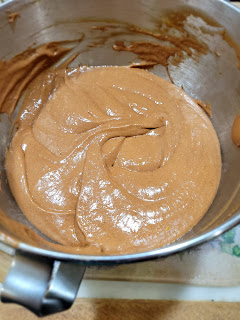 then beat on high 2 minutes. (Scrape the sides of the bowl.) 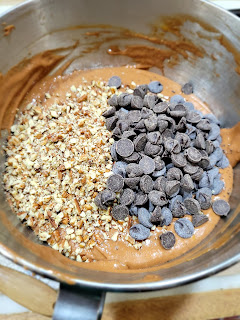 Stir in chips and nuts. 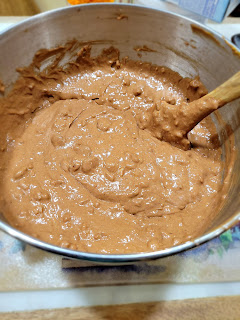 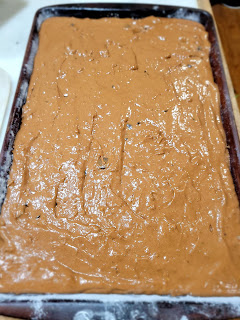 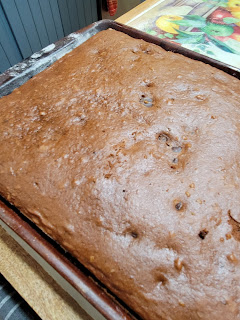 Bake for 25 to 30 minutes or until toothpick comes out clean. (I press lightly in the center of the cake. If it sinks, the cake should spring back.) 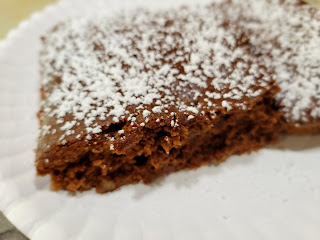 Frost with fudge frosting if you really want a rich, chocolaty cake when cake is cool, or sprinkle with powdered sugar. Refrigerate leftovers. It tastes even better the next day! (which is when I served it) 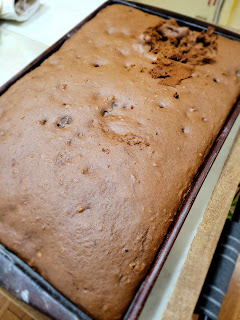 This is what the cake looked like after my hand slipped and the oven mitt I was wearing scraped across the top. It was a good thing it was so big (jelly roll pan), but it just made me sick when I did it. (Not literally.) 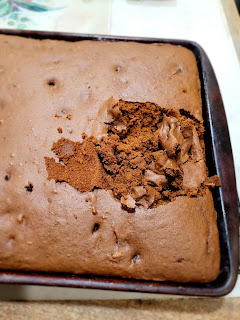 The very thin layer I was able to peel off and not mess up the cake. I ended up cutting out the messed up part and that is what Wayne and I ate. Then I decided to just cut off both sides and took them to Friend Fran. That is what is pictured in the picture with the powdered sugar on it. I didn't take a picture of what was left that I took to the volunteers at the thrift shop.