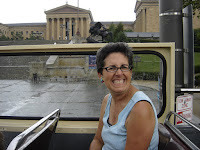 About 6 months ago Tim announced that one of his favorite singers, Stacey Kent, was scheduled to perform in New York City the first week in June. Kent, who lives in England, rarely comes to the U.S., so he wanted to see her. I agreed to go with him, but insisted we spend a couple of days in Philadelphia beforehand. I fell in love with Philly when I was there on business (by myself) two years ago and knew Tim would love it, too. He agreed and so I made reservations accordingly. 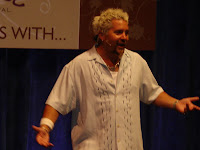 Although we weren't flying to Philadelphia till Monday morning, our vacation actually started Sunday night at California Adventure, where Disney's 3rd annual Food & Wine Festival was being held. The featured food and wine expert was our fave, Guy Fieri, host of Diners, Drive-Ins and Dives. The meal was casual and good (pulled pork sandwiches, lettuce cups, pasta, etc., and an assortment of desserts); but the best part was listening to Guy chat for two hours about the show, his family, friends, and food. He was funny, cute, and down-to-earth. I would have loved to talk to him afterward, but still had packing to do, so we left as soon as folks started to queue up for autographs. We left for the airport 9 hours later.

Horrors! As soon as we arrived at our Philadelphia hotel, I realized I hadn't packed my mascara. So off we went (on foot!) in search of a drugstore that Tim remembered seeing on the way into town. A mile later, we were standing in the cosmetics aisle of an inner-city Rite Aid. Tim waited patiently while I decided which mascara to buy. It had been 30 years since I wore anything but Mary Kay products, so I was completely flumoxed by all the different make-up brands and types. After much silent deliberation (did I mention that Tim is a saint?), I settled on Maybelline, the kind my sister and I wore in high school. (More about this later . . .)

We next went in search of dinner. Despite complete exhaustion (in our family, food trumps sleep every time), we found a cute sidewalk cafe called the Kite and Key (I swear, Benjamin Franklin is The Man in Philadelphia!), where Tim wolfed down the “three slider sampler” (pork, beef and crabcake) while I devoured a most scrumptious pork shank. We stumbled back to the hotel, forcing ourselves to stay awake for Conan O'Brien's debut as Tonight Show host--it's impossible to miss home when every other TV show and commercial is filmed in Los Angeles. We passed out in our Sheraton "heavenly bed" at exactly 12:30PM. 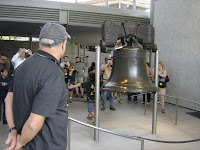 With little more than 48 hours to enjoy the sights of Philadelphia, we decided to take one of the numerous tours of the city. First stop: the Liberty Bell, which had moved me to tears the last time I was there. Not so much this time. Apparently every student on the east coast learns about the Revolutionary War in June, because the entire colonial part of town was overrun with kids on field trips. It was fun watching them react to the historical monuments, etc.—some were excited, others were just plain bored--but the sheer number of people sometimes cramped our style. Although we arrived at Independence Hall (across the street from the Bell) at 10AM, we weren’t able to get tickets to the tour until 3:30PM. We opted to go elsewhere instead. 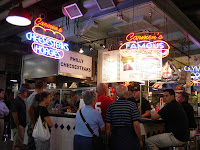 One of our favorite things to do on vacation is sample the local cuisine at large (usually) indoor markets typical of most metropolitan cities. Toronto, for instance, has the wonderful St. Lawrence Market. Seattle has Pike Place. Even L.A. has Grand Central and, of course, the world renowned Farmer’s Market on Third and Fairfax. One of the best, though, is the Reading Terminal Market in downtown Philadelphia. Home to some 80 shops, this former railroad terminal offers everything from ice cream to gyros. Tim waited 20 minutes for a Philly cheesesteak, 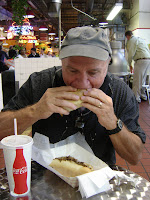 while I made a beeline straight for the pastries at the Flying Monkey Patisserie (yum!). Bellies full, we then hopped back on our tour bus and headed north.

I was intrigued by the Eastern State Penitentiary the last time I was in town, but had no time to visit, so decided to make it a priority this time. It ended up being a true highlight of the trip. Completed in 1836, Eastern State was the world’s first “penitentiary” where both men and women were brought to do meditative penance for their crimes. A high-concept masterpiece in its prime, the prison eventually became outdated and severely overcrowded and so was closed in 1971. Today it is a fascinating relic that hosts tours and art installations. I highly recommend spending a couple of hours there the next time you’re in Philadelphia. 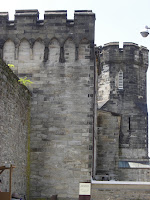 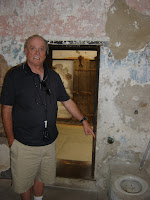 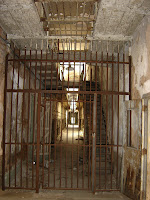 Although it was starting to drizzle when we reboarded our double-decker bus, we decided to sit top-side for its better view. Within minutes we were drenched. I looked like a wet raccoon by the time we returned to the hotel. Now I know why Maybelline mascara is so cheap!

Raccoon or not, our day wasn’t quite over yet. At 5PM I remembered that Macy’s, which houses a 1904 30,000-pipe organ, features a live recital every day during rush hour. We got there just in time to stake our claim to a piece of balcony directly across from the massive pipes. Soon the store’s marble atrium was filled with joyous music. We gasped as locals continued to shop below. What a wonderful way to end our first full day in Philadelphia. 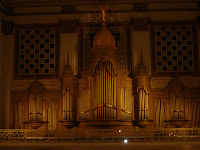