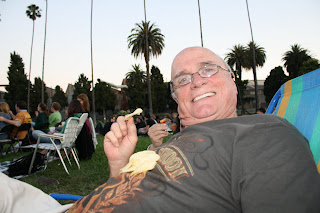 I may have missed Comic-Con last weekend, but there was no way I was going to miss a free screening of William Shatner’s new feature-length documentary, The Captains, about the lead actors (including captain Kirk himself) of all five Star Trek TV series, plus Chris Pine from the latest Trek movie. The film was being shown at Hollywood Forever, the area’s oldest and most famous cemetery, which, in conjunction with Cinespia, has shown outdoor movies for the past 10 years. Although the screenings are wildly popular, we’d never been to one until last night. 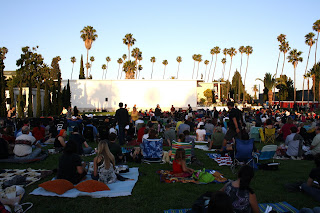 The films are projected onto the wall of the cemetery's mausoleum, while the audience reclines on a grave-less lawn nearby. Blankets and/or short beach chairs are recommended as the grass can be a bit damp. We took chairs and a blanket just to be safe.

Any excuse for a picnic, so we packed a small cooler full of fried chicken and a salad. Karen brought pasta, cherries and two kinds of cookies. We also took along a jumbo-sized bag of potato chips, just in case.

Though we’d never been inside the cemetery, we’d driven by enough times to know that most movie-goers park on the street and then walk into the grounds. We parked on Gower and schlepped four blocks to the cemetery entrance. We were so loaded down that we looked like three sherpas preparing to ascend Mount Everest. At the gate, a group of young people welcomed us with even more stuff: free movie posters, t-shirts and water. They were promoting EPIX, a new cable channel we don’t get.

Hollywood Forever isn’t huge like, say, Forest Lawn. Still, it’s plenty big when you’re carrying a blanket, beach chairs and a week’s worth of food. Tim zoomed ahead while Karen and I admired row after row of rather elaborate gravesites. Established in 1899, the cemetery is the final resting place of many old-time Hollywood legends (e.g., Jayne Mansfield, Cecil B. DeMille, Douglas Fairbanks, Rudolph Valentino, Peter Lorre, etc.). Even more interesting, though, are the engraved headstones featuring portraits of the more recently departed. I could easily imagine spending an entire day there, roaming the aisles and reading gravestone memorials. 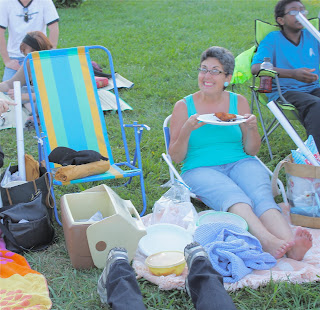 By the time we arrived at the lawn, all the close spaces were taken, so we setup camp toward the back of the crowd. It was still light out. A DJ entertained us with a dance competition and various silly contests, while we ate dinner and waited for the movie to start. Prizes were given for best Star Trek costumes, so there was lots to see until sunset.

Then around 7:30PM, I noticed lights flashing and commotion over by the mausoleum.

“I think Shatner is here,” I told Tim and Karen. They went to investigate while I held down the fort. 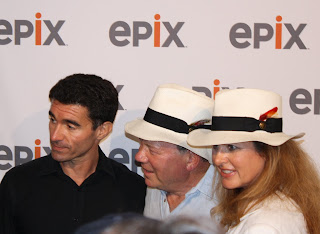 Sure enough, a red carpet had been laid down and Bill and his wife were talking with the media. Tim snapped a bunch of photos and then came running back to report what he’d seen. A few minutes later, Shatner, wearing a white fedora, was introduced to a rousing round of applause. He pointed towards Paramount Studios, which backs up against the cemetery, and noted—a little sadly, I thought—that it’s been almost 50 years since he and the crew of the starship Enterprise filmed the first Trek series right there on the Paramount lot.

I could have gotten all misty-eyed, but instead yelled, “WE LOVE YOU BILL!” And then the movie started. 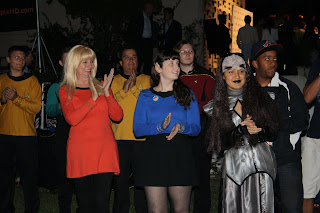 How fun to watch a Star Trek documentary with hundreds of like-minded fans! They knew exactly when to laugh and exactly when to cheer. I was completely in my glory! But soon it was all over as the grounds became suddenly very dark. (No overhead lights!) We gathered our belongings and started heading back toward the car.

I was trying hard to not to stumble, when I heard Tim say, “Babe, there he is!”

I looked up and immediately recognized Shatner’s white fedora just three feet from where I was standing. He was slipping into a black towncar. I considered thanking him for making such a wonderful movie, but just couldn’t get the words out fast enough. Sometimes it’s just easier to yell “We love you!” from the back of a crowd than it is to say “Thank you” in person.

We walked back toward Gower and beamed home.