The Fall Of The Imperial Guard 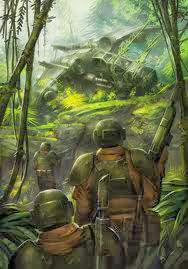 Or is it just the rise of the Xenos(and other armies) that have contributed to the supposed decline of IG.  First off I don't think the IG have declined at all, the army is still great and more than competitive on its own, even more so with allies.  I think there is a few things going on here that are contributing to this "decline" though.  First is simply that other armies have gotten better, across the board, all the new codex's are competitive, some more so than others (Tau).  What this means is that IG is no longer king of the hill with all the undesirables beneath it.  Now we have to share the table and sharing sucks.  I personally have had to work a little bit harder to win recently, and I like it.  Are the uber net builds hard to beat, yeah and you will struggle against it.  But most people don't play that way, or even have the models to do those builds.